If you are looking for something new to watch with the kids during long periods of downtime, here are some of my favorite options right now on Disney Plus.

Lots of new content has made it to Disney Plus this summer. There is a lot for the whole family to enjoy together. One of the reasons I love Disney Plus is how easy it is to find and watch family-friendly content. There is so much from Disney and their associated brands that you can binge-watch for days and never get bored with what’s available. If you are looking for something new to watch with the kids during long periods of downtime, here are some of my favorite options right now on Disney Plus.

You can’t go wrong with animated classics like Cinderella, Peter Pan and Snow White and the Seven Dwarfs. The Jungle Book was the last animated film Walt Disney personally oversaw. These movies are tightly constructed so they have a very short running time. It’s easy to keep them rolling when you have some extra time to kill.

The Legend of the Three Caballeros

This fun series is relatively new. Inspired by the classic film featuring the titular characters, this cartoon series places Donald, Jose, and Panchito in an entirely new context. It’s sort of a Tale Spin meets Ducktales in which the three friends must become heroes like their legendary ancestors and fight mystic forces of evil. The 13 episode season has an overarching story perfect for binging.

Disney has released a lot of really fun Disney park content, which is great for those of us who aren’t visiting the parks right now. The Disney Cruise Line just released their Tangled stage show on Disney Plus. You can also watch the Happily Ever After Fireworks and other neat parks content you can’t experience anywhere else.

If you have very young children, Little Einsteins is a priceless jewel. For some reason, it doesn’t always pop up as an option, even in search. You have to spell the whole thing out for it to pop up, but it’s there. Don’t give up on it if it’s your child’s favorite show.

This is a really great family show full of DIY ideas inspired by Disney. It’s a great way to get the family involved in something together and do more than just watch.

Pixar in Real Life is a fun look at how people react to seeing memorable Pixar characters and moments recreated in the real world. If your family loves Pixar, this is a great way to stay entertained with something a little bit different and surprising.

The Disneyland series is a classic and it’s so inspiring to watch. It’s best for older kids who love Disney and want to know more about its history. The Opening Report is new and it details some of the progress in building Disneyland and putting some of its main attractions together. Other episodes in the Disneyland series are also available such as Disneyland Around the Seasons and The Plausible Impossible which explores important animation techniques.

101 Things To Do At Disney World

Tips For Visiting Disney In The Winter

Benefits of Staying At A Disney Resort

How To Do Walt Disney World In A Day

10 Things To Never Do A Disney World

MAKE YOUR DISNEY VACATION MORE FUN WITH THESE ITEMS

Pack More Fun Into Your Disney Vacation With These Travel Essentials

Hi friends, my name is Melissa. I'm the Disney fan behind The Disney Game Plan. Every vacation needs a game plan, especially a Disney Vacation. Here, I share my best planning tips and tricks to make your Disney vacation more magical. Contact me at disneygameplan@gmail.com. 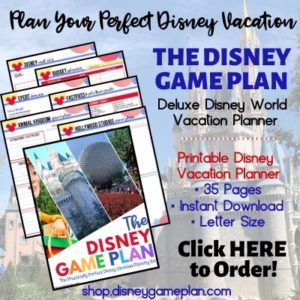 Get helpful Disney planning tips delivered to your inbox.